The weak jobs report this morning seemed to trigger a strong sell-off in the markets, even though the jobs report wasn't that bad. Economists were predicting a weaker number at +190k, and it came in at +151k. The unemployment rate dropped to 4.9% and hourly wages improved, so that was encouraging. But look at the big picture of the jobs numbers: 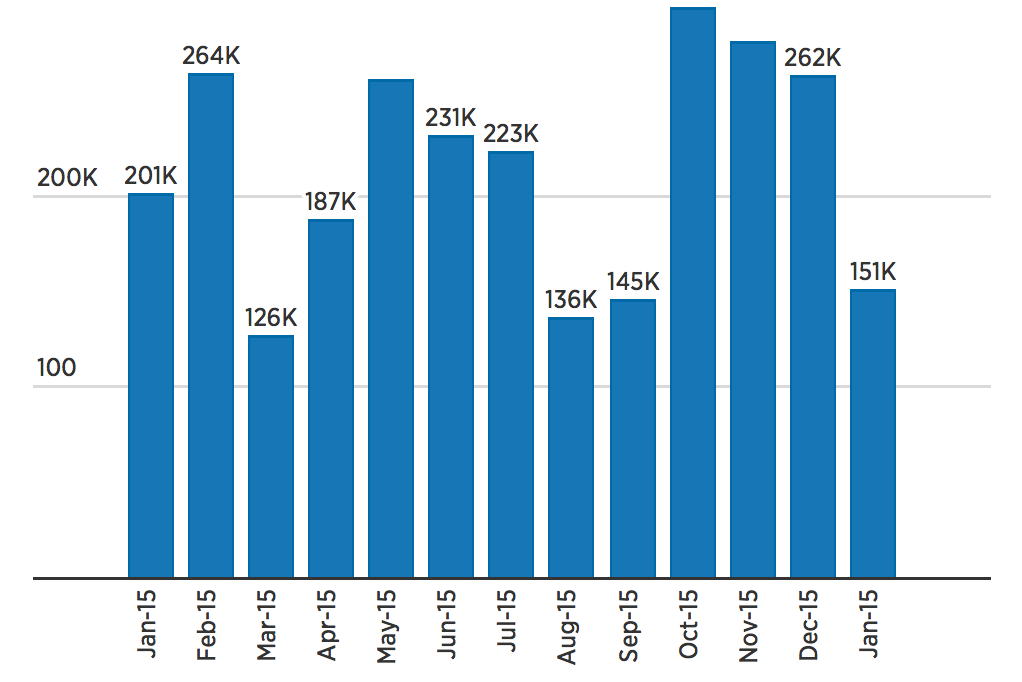 Today's number was less than the last three reports, but in line with the two previous reports which were lower than the 200k+ reports last summer. Looking at the longer term picture leaves us concluding that the creation of jobs is roughly flat, so why the extreme market reaction this time? This is just one more data point for the general psychological state of the market - nervous, pessimistic, and obsessed with the Fed. I even read once again today of the Fed's plans to raise interest rates four times this year - have we not debunked that nonsense yet?

Another data point is the reaction to LNKD's earnings report. Market analysts appear to be consistently pleased with the results, but the market focused management guidance that they would be developing some projects with longer time frames that would ultimately make LNKD a stronger company. The result was a bloodbath. LNKD traded down $84 or 44% off of Thursday's close, and this bled over into the tech sector in general. Again, it seems the "sky is falling" crowd is in control.

Support roughly in the neighborhood of the August flash crash continues to hold for SPX; in fact, today's close was about $10 above the flash crash lows and about $20 above the lows set January 20th. RUT closed at support set at its recent low of January 20th. I can't see the future any more clearly than you, but the price action so far remains consistent with the choppy retesting of support after the lows of the correction. This period of back and forth trading lasted about a month after the August flash crash.

It's hard, but try to put this craziness behind you and enjoy your weekend. Reflect on what's really important.